Africa is such a wide ranging and diverse continent. Ranging from arid deserts to rainforests and lake regions, the African continent is home to a long list of flora and fauna species. Anatomically modern human beings are suggested to have originated in Africa and some domestication processes may have occurred here, leading into modern day Africa. We can look back and trace different animals and plants, back to the early moments of domestication and through the transition of hunting-gathering communities to more sedentary foragers to pastoralists. 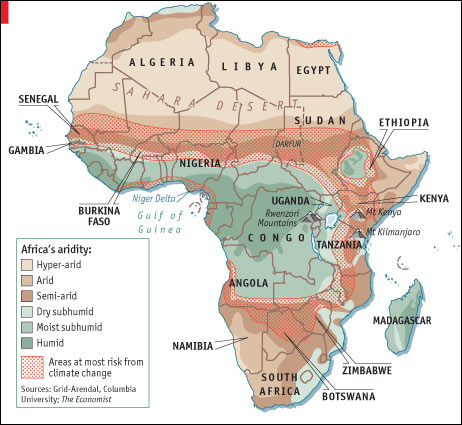 Domestication is an interesting concept. It is often viewed as specific individual events. Some researchers suggest looking at domestication as a co-evolutionary process between human influence and natural processes. It is often difficult to trace the start of domestication. In Africa, there is some debate as to how and when such processes began, in particular with livestock animals.

ANIMAL DOMESTICATION: The domestication of some species, such as cattle, goats, sheep and dogs demonstrates a co-evolutionary process in Africa. Looking at rock-art, zooarchaeological evidence, genetic markers and other remnants from early humans in Africa, it is thought that domesticated cattle first originated in grassy areas of the Nile region. These cattle had low-laying, straight backs initially. However, most modern breeds have a humped shoulder, reminiscent of Southwest Asian breeds. Looking at mitochondrial DNA and other genetic markers, it is suggested that African cattle may have the mtDNA more similar to Bos taurus (straight back cattle) but also have the integration of Y chromosomal DNA from Asian Bos indices (humped back cattle), resulting in the humped phenotype. What this means is that it is unclear as to whether domestication of cattle in Africa is independent from initial domestication in the Near East.

Sheep and goats adapted fairly quickly to their different environments across the continent. While not as well studied on the genetic level as African cattle, there is a working understanding of their migration and domestication patterns. It is thought that goats were introduced to Africa at three locations; across the Mediterranean, overland via the Sinai Peninsula, and through the Red Sea Hills. The two main types of sheep in Africa currently, thin-tailed versus fat-tailed most likely were introduced through the Sinai Peninsula and the Red Sea Hills as well. However, it is currently unknown as to whether the fat-tailed sheep were independently domesticated separately or moved across the Congo Basin into Southwestern Africa.

Dogs are a very interesting species in African history. Although often left out of discussion due to limited archaeological deposits, Canis familiaris have a long history in Africa. Some of the oldest breed types were thought to be of African origin, such as the Basenji and the Saluki. Dogs were demonstrations of economic status and very highly valued during hunts. There is actually a reported dual burial of a forager and his dog, located at Cape St. Francis, Eastern Cape in South Africa, which dates back to the first millennium BC. Karma culture, 2700-1500 BC, had mortuary complexes for their dogs.