Located in western Ireland, the mid Neolithic site of Behy (Céide) is significant because it features a coaxial field system.  Situated between the ocean and a peat bog, the fields at the Céide site were laid out in systematic rectangular patterns.  Radiocarbon dates from the site taken from pine trees, that were preserved in a bog, claim that the site dates to around 4500 BP.   The fields themselves were partitioned by stone walls.  Some scholars believe that Behy was a pasture site for cattle.  This argument is supported by the pollen and grass samples that have been taken from the site. 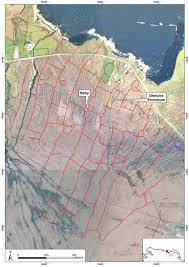