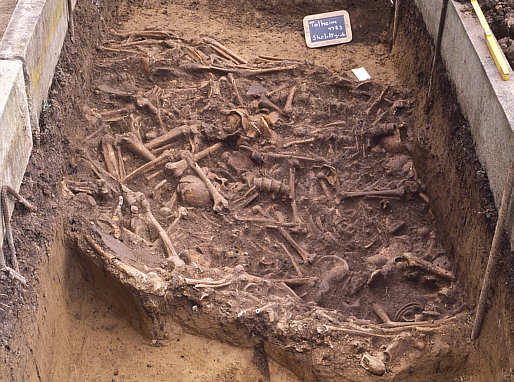 The Early Neolithic site of Talheim, located in modern day Germany, is famous for a pit containing the remains of 34 individuals who were massacred, presumably by a rival group.  The victims have been classified as Neolithic farmers belonging to the Linearbandkeramik culture or LBK.  The LBK maintained a sedentary lifestyle, and have been associated with long-house structures.  The site has been dated to roughly 5000 BC.  The villagers were killed by a variety of weapons including arrows, clubs and two distinct LBK axeheads called ‘Flachhacke’ and ‘Schuhleistenkeil’.  In the aftermath of the attack, the bodies of the villagers were thrown into a pit along with some of their possessions which included LBK ceramics.